I’m going to my third Lady Gaga concert this weekend, but it’s the first time I won’t be in New Orleans. Three concerts may seem excessive, but I’ve never seen the same performance twice. I love that she’s not only an incredible performer, but a constantly changing artist. Like “No Floods” on Stefani Germanotta (Lady Gaga) Band’s Red and Blue EP from 2006 to to her solo album, The Fame, in 2008. From her fashion to her music, she’s keeps people interested by not staying static.

I saw Lady Gaga in concert for the first time December 2009. I didn’t know much about her and only knew her songs from the radio, but my best friend wanted to go and I knew we’d have fun. We ended up going in a limo with a huge group of our friends, and Gaga gave an amazing performance. Everything was dramatic but so clean, especially her dancers (like SYTYCD alum Mark Kanemura), and I left the concert with an obsession. I bought both of her albums the next day.

By May of 2010, Gaga released the second version of her Monster Ball Tour,made for bigger arenas, was coming to the New Orleans Arena April 9, 2011. We bought the tickets practically a year in advance, and instead of being in the nosebleeds again, bought floor seats. I found out around September that April 9 was also opening night for my senior spring musical, which I’d done every year since eighth grade. I ended up performing the show, changing out of my costume, putting on a (second) pair of fake eyelashes, and getting to the concert right before her first song. The frantic rush was worth it to see the new, revamped Monster Ball.

Now she’s gained weight and dyed her hair back to its natural brunette, and I’m sure the tour has changed just as much. Here’s hoping the third round is as good as the first two. 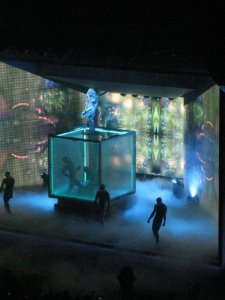 Lady Gaga roles out to perform her opening song “Dance in the Dark” at the UNO Lakefront Arena, New Orleans on Dec. 27, 2009.

Lady Gaga is lifted from under the stage after a major costume change at the New Orleans Arena April 9, 2011.

Phantom of the Opera celebrates its 25 birthday today, making it the longest running musical Broadway history.  Playbill.com gives all the background information on the famous attendees, including the incredibly handsome and talented Hugh Panaro. It’s really a shame his face is covered up for most of the show.  I saw it for the first time in 2010 (kind of crime when since we go to New York every year for Thanksgiving), and loved it more than I could have imagined. Plus, Sierra Boggess, the current Christine, is just perfect. 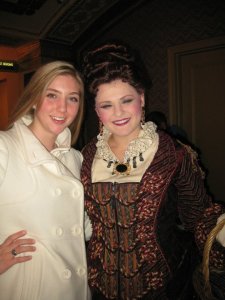