When I heard we were getting 5-10 inches of snow, I think I looked something like this.

Living most of my life in a place where snow is a rarity, it’s always been magical to me. The two times it snowed in New Orleans (it was only a couple of inches, but we were still excited) everything shut down and everyone was excited. The most recent snow storm was my sophomore year of high school. We had a ten minute passing period, and the entire school ran outside to play, take pictures and enjoy the snow. Most of it was melted by lunch, but we still made snowballs, snowmen and snow angels. Even though no one knew how to handle the snow, schools and businesses remained open because, let’s get real, how many people actually thought it was going to snow?

My snow days last week were the first since pre-school when I lived in Connecticut, and they were fantastic. My first day was filled with walks through Greek Town, sledding in trash bags, and making snow angels on Sankowski Field. We played around for about an hour, and I was absolutely exhausted by the end of it. After a hot shower, the rest of the day was spent in sweatpants with hot chocolate while watching movies and doing homework. I think I could get used to snow days. 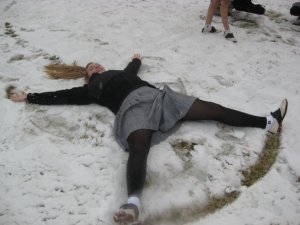