The last two weeks have been packed with trips and sightseeing.

We took a group trip to Stonehenge and Bath that felt more like a trip into a tropical storm.  From the minute we drove into the Stonehenge visitor parking lot, the sky looked like it would burst open. We got into the tram that would take us to the stones, and the rain just started pouring.  I zipped up my coat, tightened my hood and stepped out of the tram clutching my umbrella for dear life. The wind was driving the rain sideways as we walked up the small hill towards the stones, so I tried to use my umbrella as more of shield. It really didn’t help. After laughing our way to the top through the wind and the cold, we stayed long enough to snap a couple pictures before rushing back down the hill to catch the tram back to the visitor’s center.  Bath was, thankfully, drier and most of the Roman baths were inside.

We’ve been trying to take advantage of Tuesday and Thursday mornings to explore London. We went to a photography exhibit of BAFTA nominated actors and actresses at Somerset House, and I met my friend Anna for a ride on the London eye.She’s studying abroad in Manchester and was in town for about five days. It’s so hilarious that we’re going to school closer now than we do at home. The eye was great and not very crowded because we went right as it opened.

It felt like we were just having a chat in a coffee shop with way better scenery. I also didn’t realize we were moving most of the time unless I looked outside of our pod and had a new view. I didn’t have time to go to the Churchill bunker with them before class, so I hopped on the tube to borough market for lunch.  I never been on a weekday or gone alone, but it ended up being a great experience. I got a delicious Italian sandwich and the best café au lait I’ve ever had. It was fun to see the market less crowded and watch “the regulars” chat with stand owners while they ate.  There was a street brass band playing in odd costumes, and it was just too New Orleans to not stop and listen.  Later that afternoon, we explored Greenwich and finished off with a ferry ride back to Waterloo station.

Friday, Ciera and I saw Once in the front row for only 25 pounds each.  We were looking up how to get the best deal all week when Ciera found a website detailing the information on day seat tickets for different shows. She went to the box office about an hour before it opened, and was able to get us the fabulous, cheap seats. It was an absolutely magical performance, and it was really fun to go with someone who had never seen it before.  They have waiters that take drink orders from your seat, and they sell ice cream at intermission. Completely different setting than a Broadway theatre, but the performance was just as wonderful.

We got 10 pound round trip train tickets to Windsor on Saturday, and we spent the day touring the castle and exploring the town. I think I like that atmosphere a little better than straight up museums. St. George’s Chapel was absolutely beautiful, and it’s just insane to me that so much history can be in one place.  Windsor was a cute town and had great shopping. 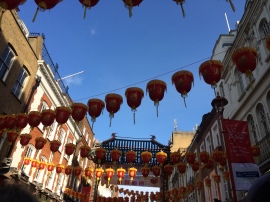 Ciera and I celebrated Chinese New Year with practically everyone else in the city on Sunday. We were packed into huge crowds and had the hardest time finding an entrance into the main streets. We finally found a gate, but police officers were keeping everyone outside. Apparently they thought it was too crowded, but opened the floodgates just a few minutes later. I can’t believe it wouldn’t be easier if they just let the crowds flow naturally in and out of the main festival center. I think they’d benefit from a Mardi Gras training course from NOPD. I digress. The food was absolutely delicious and pretty cheap for large portions. We came home and got ready to watch the Super Bowl. We went to the Oxford Arms pub around the corner from our flat, and actually stayed for the whole game. It was really fun meeting and seeing so many English and European people watching and trying to understand the game together. Plus, when am I ever going to voluntarily watch a football game in the middle of the night ever again?

All of the tourist activity was followed the most London experience I’ve had so far: the tube strike. I had to take the bus to work, and, of course, got on the one going the wrong direction. I, thankfully, realized this before I’d gone very far, but it still took me 50 minutes to get to work instead of my usual 15. Just learning to live like a local!